Home
Condolence-Sympathy-Letter
Write a Letter of Condolence to your friend on the death of his father. English Letter Writing for Class 8, 9, 10, 11, 12 Students.

To a friend on the death of his father. 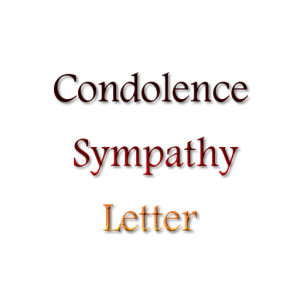 I received the message about the tragic death of your father this morning. Since last Friday when you told me that his health was falling alarmingly I was disturbed. What a grand old gentleman he was ! shall always regard it as an honour and a privilege to have known him. Many times have I turned to him for counsel and he was always willing, from the rich experience that long life had granted him, to help me. I feel, as will many others, that I have lost a counsellor and a true friend.

I distinctly remember the occasion when he retired from his post at the Council of Officers nearly twenty years ago. He spoke of looking forward to years of joy. Yet I suppose he was one of the busiest men until almost the very end. He could never be idle.

During these days of sad bereavement, I believe your sorrow will be tempered by the knowledge that his life has not only been long but that it has been abundantly useful. He enjoyed the respect and affection of all who knew him.

As you mourn him, it will be the mourning of a proud son at the loss of a noble father, whom to know was to esteem.